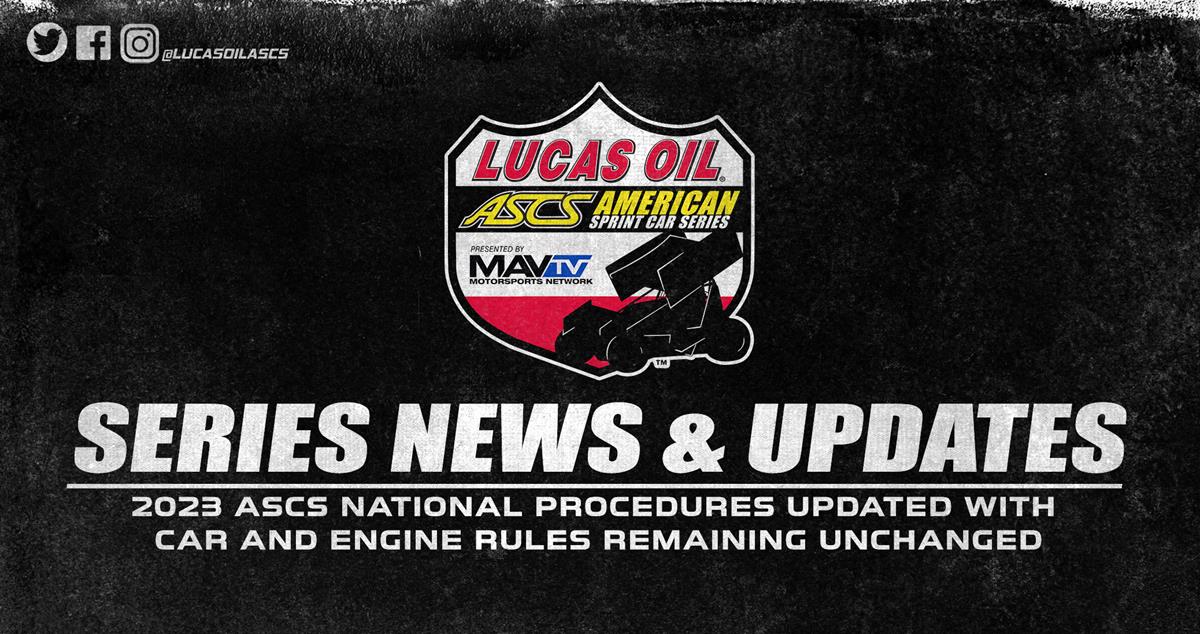 DRUMRIGHT, Okla. (January 25, 2023) For the 2023 season, the rules that govern the American Sprint Car Series will only see updates to run of show and format. Car and Engine rules will remain the same. Rule updates are for National Tour events. Regional event format and run of show will remain otherwise unchanged except for the placement of lapped cars under cautions and red flags.

On the changes, ASCS owner Terry Mattox said, “Since we’ve moved to a format where we qualify, we used the first year to see where we needed to make changes. The biggest being how we award our points during the event to set up the show. From there, it was small things that we feel will make the event better and fairer for the teams. Split scoring, lapped cars to the tail, and the work area. These are things that needed to be updated.”

For the 2023 season, the following has been updated in the ASCS Rule Book.

Passing/Qualifying Points: The largest change will be the National Tour’s Qualifying and Passing Points scale. Used during the 2022 Hockett/McMillin Memorial, the point structure was a better pairing with the qualifying/passing point format. The qualifying format and inversion into the Heat Races will remain unchanged.

Lapped Cars: All restarts will take place with the lead lap cars moved to the front of the field. Lapped cars will pull to the inside and fall in behind the last car on the lead lap in their order of running.

Work Area: Time in the work area of 60-seconds will be granted during the first half of the A-Feature if it is your caution. At any other point during the night, no time will be given. Once the lineup on the track is correct and the caution lights go down, you must remain in the work area. Once you go a lap down in the work area, you are done for that race.

Driver Registration is open for the 2023 season and is required to be eligible for end-of-the-year payout and other contingencies. Teams can register online at http://www.ascsracing.com. You are not required to be a member to compete at an ASCS event. The membership also carries a secondary insurance policy from Reel Media will be issued to each paid member, $5,000 accidental death & dismemberment, $50,000 medical accident (with $10,000 deductible or any available track insurance, whichever is higher, see policy for details).

The updated rules are posted at https://www.ascsracing.com/series-info/rules.aspx. Updates are in red. Questions on the tour can be directed to Terry Mattox by calling/texting (918) 417-0624 or email terry@ascsracing.com.

When making it to the track is not an option, the series can be found on http://www.floracing.com, and is included in the platform’s $150 a year subscription plan.