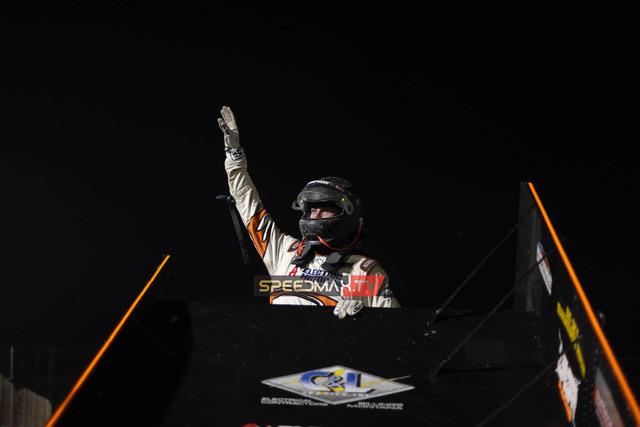 GREAT FALLS, Mont. - It was a moment Joe Perry had waited over seven years for. Sunday night at the Montana Roundup finale at Electric City Speedway, Perry finally got that second sprint car main event win as he raced his way to a thrilling ASCS Frontier Region victory.

Perry raced his way into the lead following a restart, trading sliders and crossovers with series points leader Trever Kirkland before getting the lead again and clearing a slider thrown by Kirkland to hold onto to that top spot in a wild set of laps around the 3/10-mile clay oval bullring. Perry then navigated his way through slower traffic and held off the late race charge by James Setters in the final laps, taking the win aboard the Chuck Perry No. 28 Kannady-powered Maxim.

For the Billings, Montana driver it was his second career ASCS Frontier Region sprint car win, and it was a long wait to get that win. His first win, which also came at Electric City Speedway, was all the way back in June 2015. A clearly tired Perry was still very happy to celebrate with his family. Perry and his wife Lauren had just become parents before that first win and took a victory family photo with their then infant daughter that night. Sunday night they got to take a victory photo as a family of four as their son joined in for the first time.

The win was very popular in the pit area following the race. Perry also thanked Big Sky Speedway owner and former racer Jerry Brey for help securing the motor to race this weekend. Perry and his father and crew chief Chuck had dealt with multiple engine failures this year, making for a frustrating season. That made Sunday's win all the more satisfying for the father and son duo.

Perry started outside the front row for the 25-lap feature. Kirkland, who won Friday's Montana Roundup opener, led the opening lap but soon was in a three-way war with Perry and Great Falls driver Kory Wermling that saw furious racing between the three veteran racers. Contact was then made between Kirkland and Wermling as they raced for the lead in front of Perry, and that sent Wermling into the front stretch wall suffering severe damage, ending his night.

With Wermling out, Kirkland held the lead position but lost it to Perry after their slide job battle following the restart. Perry drove off with the lead while Kirkland then had to fight for positions with Setters and five-time sprint car champion Phil Dietz. After getting by Kirkland for second place Setters tried to make a run at Perry as they moved through lapped traffic, but ran out of time.

Setters, from Spirit Lake, Idaho but now living in Great Falls, settled for a strong runner-up finish at his home track in his family's No. 2 Borello-powered Helix. Setters won his first career 360 sprint car main event win in the May 28th ASCS Frontier Region main event at Electric City Speedway.

Heat races earlier in the evening were won by Perry, Austyn Gossel and Miller. Perry won his heat race all three nights this weekend at the Montana Roundup. The pole shuffle for the first four starting positions in the main event saw Kirkland sweep all three rounds, defeating Wermling in a wild first round before besting Austyn Gossel. Kirkland then defeated Perry in the final round to win the pole position.

Two races remain on the 2022 season for the Brodix ASCS Frontier Region. The series is again the Friday show of the Big Sky Supernationals at Gallatin Speedway outside Bozeman on Friday, September 9th. The season wraps up with a Saturday show on September 10th at Big Sky Speedway outside Billings.