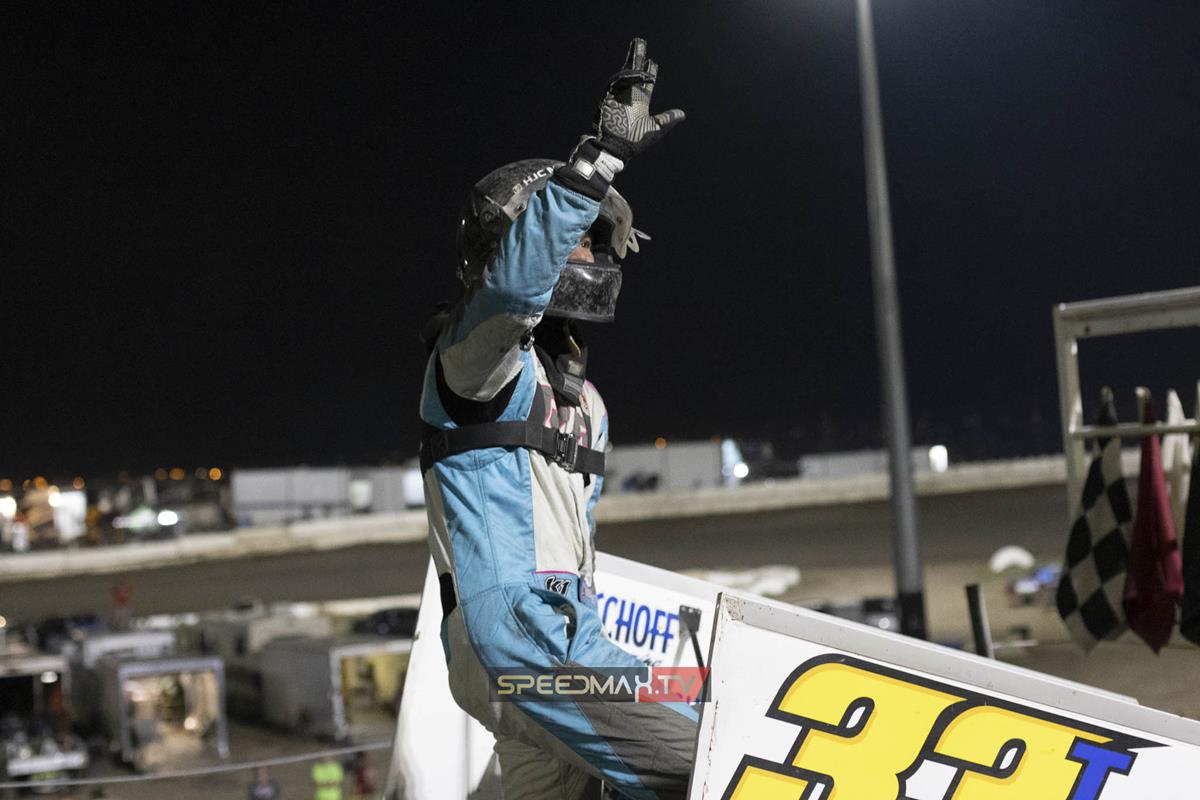 The win was Driever's third career victory with the series but it was the first in more than a year for the Meridian, Idaho driver. Even better for Tyler, it was on his dad Clayne's birthday and he happened to be there to celebrate the victory with him. It was also redemption for Driever, who spun out while running second and challenging for the lead the night before.

Driever started on the pole of the 25-lap feature but ran second to series points leader and Friday night winner Trever Kirkland in the early stages of the event. As he did the night before, Driever stayed with Kirkland and challenged for the lead multiple times as they navigated traffic on a dry race track. In a dramatic reversal of fortunes from Friday however, it was Kirkland this time who had a mishap 10 laps into the race when he tangled with a lapped car and severely damaged the front end of his car, requiring a tow to the pit area and ending his night.

Now out front, Driever at first kept a healthy lead over the rest of the field before Coaldale, Alberta driver Kelly Miller made a run at the end as they worked their way around slower cars. Driever fended off Miller's last lap charge and picked up the win in the Driever Racing No. 33t Shark-powered Maxim.

The win Saturday was Driever's first at Electric City Speedway. His last win with the ASCS Frontier Region sprint car series was in August 2021 at Sweetwater Speedway in Wyoming. A happy Driever celebrated in victory lane with his mother Lea and birthday celebrating dad Clayne.

Miller finished in the runner-up spot for the second straight night aboard the KDM Motorsports No. 2jr AMS-powered EMi after starting third in the main event. Great Falls driver Kory Wermling finished third aboard his family's No. 9k Carbone-powered Maxim after starting fifth. As they each did the night before, Phil Dietz and Joe Perry finished fourth and fifth respectively.

An unofficial finish was posted on MyRacePass and questions arose shortly after regarding finishing positions from around the middle of the field back. It was decided by ASCS Frontier Region officials to take Sunday to review the finish with Electric City Speedway scoring officials before posting an official finish sometime later.

Heat races earlier in the evening were won by James Setters, Perry and Kirkland. Driever won the pole shuffle and the right to start on the pole of the main event after defeating Kirkland in the final round. Miller and Austyn Gossel were the other pole shuffle participants.

The 26th annual Montana Roundup concludes on Sunday night at Electric City Speedway. Tickets are $20 for adults. Those 55 and older, students ages 13 to 17 and military members are in for $14. Kids $12 and under are in for $5. Racing is scheduled to start at 7:00 p.m. Mountain Time.