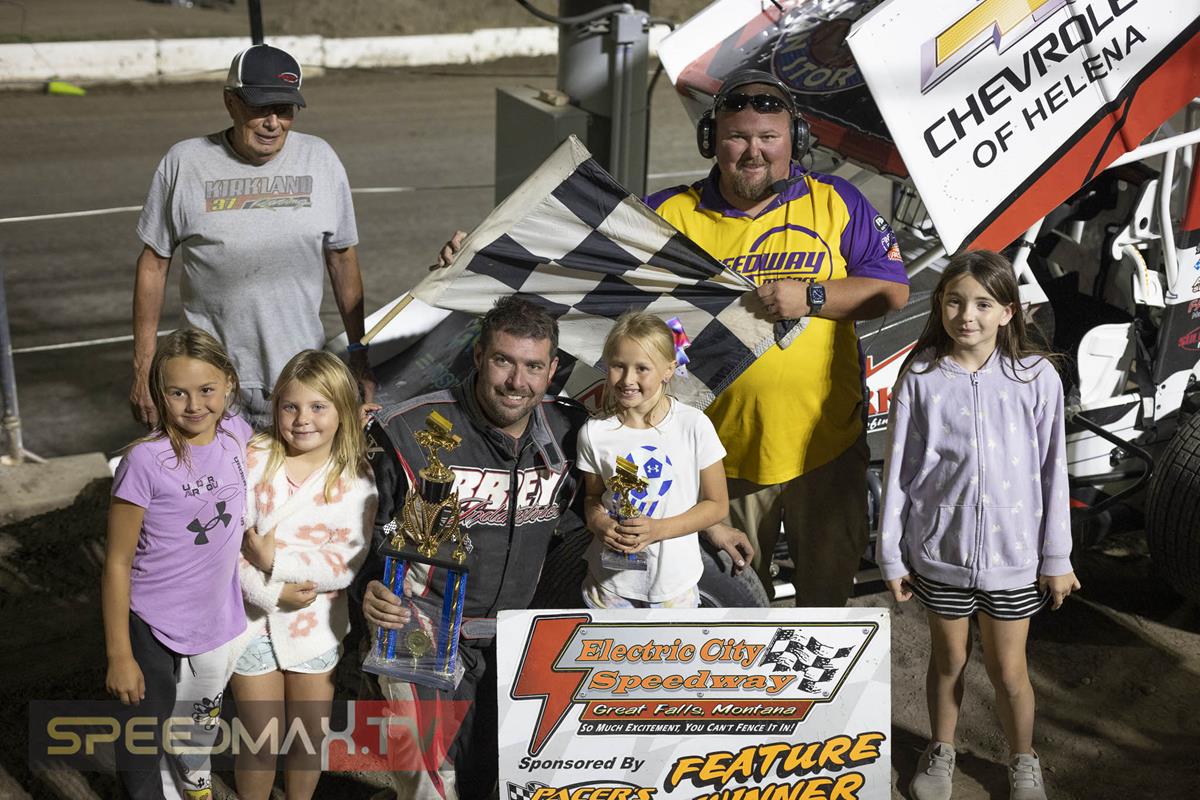 GREAT FALLS, Mont. - Enjoying one of the finest seasons of his racing career, Trever Kirkland scored his fourth ASCS Frontier Region sprint car victory of the season, taking the opening night of the annual Montana Roundup at Electric City Speedway.

The Helena, Montana driver led all 25 laps of Friday's feature at the Great Falls clay oval, fending off early challenges from Tyler Driever before cruising the win in the latter stages. Kirkland's win not only tied the series lead for victories, but also adds to an already commanding points lead. With four races remaining, Kirkland leads unofficially by 179 points over Great Falls driver Kory Wermling, who finished eighth.

Kirkland started on the pole after defeating Driever in the final round of the pole shuffle. Kirkland took the lead on the start, but multiple times the young Driever of Meridian, Idaho threw slide jobs in an attempt to take the lead on a dry track that saw the top groove being the preferred line. Kirkland escaped each time, once squeezing between Driever and the outside wall exiting Turn 4 while they both worked their way through slower traffic.

Driever's challenge for the lead abruptly ended when he spun out exiting Turn 4, a hearbreaking end to a podium run. That handed the second position to Coaldale, Alberta driver Kelly Miller, who couldn't catch Kirkland on the ensuing restart as Kirkland jetted away. Miller did gain momentum and began to close in on Kirkland in the final laps but ran out of time as Kirkland scored his second win at Electric City Speedway this season aboard the Kirkland Racing No. 37 Shark-powered Triple X. Kirkland won the season opening ASCS Frontier Region event at Electric City Speedway on May 27th.

Miller, third in the points entering the weekend, finished second aboard the KDM Motorsports No. 2jr AMS-powered EMi. James Setters of Spirit Lake, Idaho made a late run and earned a podium finish, finishing third aboard his family's No. 2 Borello-powered Helix. Five time sprint car champion Phil Dietz made a late pass and finished fifth ahead of Joe Perry. Jordan Milne, Bryan Gossel, Wermling, Austyn Gossel and Driever rounded out the Top 10.

Heat races earlier in the evening were won by Perry and Kirkland. In the pole shuffle, which fans at Electric City Speedway saw for the first time since the series implemented it more than a month ago, Miller defeated Perry in the opening round before falling to Driever. Driever than lost to Kirkland in the final round in the match race for the pole position.

The 26th annual Montana Roundup continues on Saturday night and concludes on Sunday night at Electric City Speedway. Tickets each night are $20 for adults. Those 55 and older, students ages 13 to 17 and military members are in for $14. Kids $12 and under are in for $5. Racing is scheduled to start at 7:00 p.m. Mountain Time all three nights.