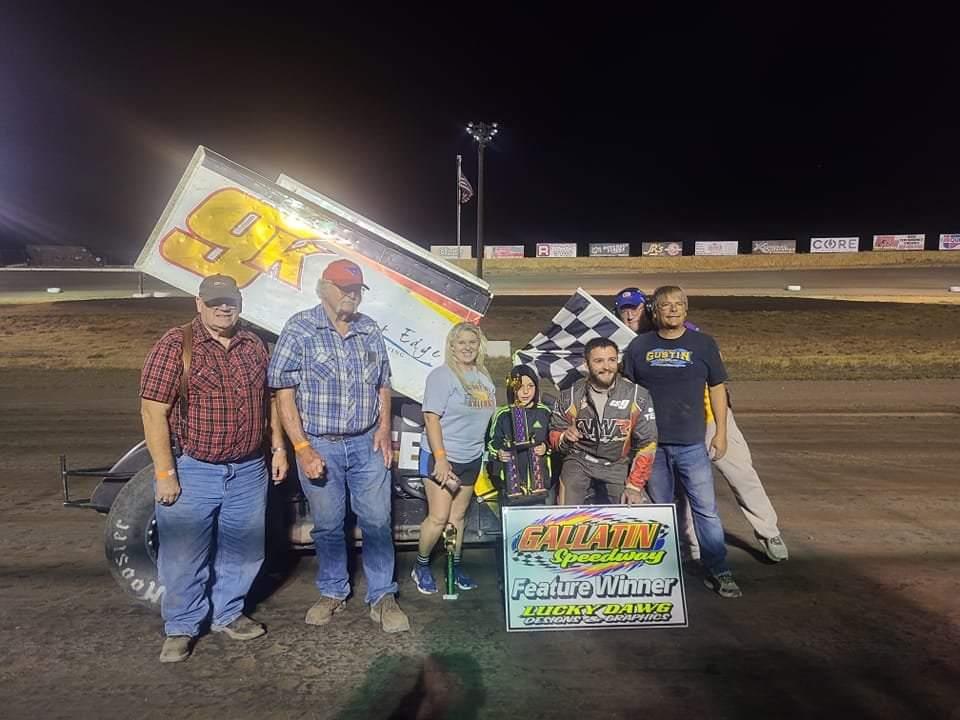 BELGRADE, Mont. - Kory Wermling got a monkey off his back and dominated Friday's sprint car main event at Gallatin Speedway, picking up his ASCS Frontier Region victory of the season.

For the Great Falls, Montana driver it was his first win in more than a year, the last one being his first career 360 sprint car win that also came at Gallatin Speedway. A run of bad luck, including parts and motor failures, followed over the next year and Wermling was left wondering if he'd ever get win that second win. When things finally came together on Friday night, Wermling was eager to celebrate and was all smiles in victory lane on the front stretch.

Friday's win aboard his No. 9k Moyle-powered Maxim also came easily for Wermling as he led all 25 laps in a race that was slowed only twice by caution flags. Taking the lead from pole sitter James Setters on the start, Wermling was never truly threatened for the lead. On both restarts Wermling motored away from Setters, and at times led by a straightaway.

Wermling and Setters started on the front row thanks to the series doing something a little different than usual. Agreeing to add to the show at the request of Gallatin Speedway, instead of doing the usual redraw the series ran a Chili Bowl-style pole shuffle for the top four cars in heat race points, and Wermling for a time put on a small show for the fans. Wermling was seeded third and first faced off against fourth seed Phil Dietz, defeating him in the first two-car, two-lap shootout after multiple passes were traded between them and moving on to face the two seed Trever Kirkland. Wermling defeated Kirkland, the series points leader, after the two again traded multiple passes and advanced to face Setters, the high points driver, to settle who would start first and second for the main event. Setters kept Wermling from sweeping the shuffle and won the pole.

Despite defeating Wermling to win the pole shuffle, Setters was unable to challenge Wermling during the main event, but the Spirit Lake, Idaho driver did settle for a strong second place finish in the family's No. 2 Borello-powered Helix.

Laurel, Montana's Dietz and Helena, Montana's Kirkland traded passes for third place a couple of times during the event. Dietz, who won the last race at Gallatin Speedway on July 1st, ended up with the final spot on the podium, taking third aboard the Dietz Racing No. 72 Panella-powered Maxim.

Kirkland saw his run of three consecutive runner-up finishes snapped, but still finished fourth and one spot ahead of Coaldale, Alberta's Kelly Miller, which for Kirkland added five points to his lead, now at 73 over Miller in the ASCS Frontier Region point standings.

Heat races earlier in the evening were won by Kirkland and Dietz.

The series races again Saturday at Big Sky Speedway, located north of Billings. Racing is scheduled for 7:00 p.m. with admission being $20, with veterans and seniors in for $15. As is tradition at Big Sky Speedway, kids 60 inches and shorter are in for free. Midwest modifieds, street stocks and sport compacts join the ASCS Frontier sprint cars on the card.