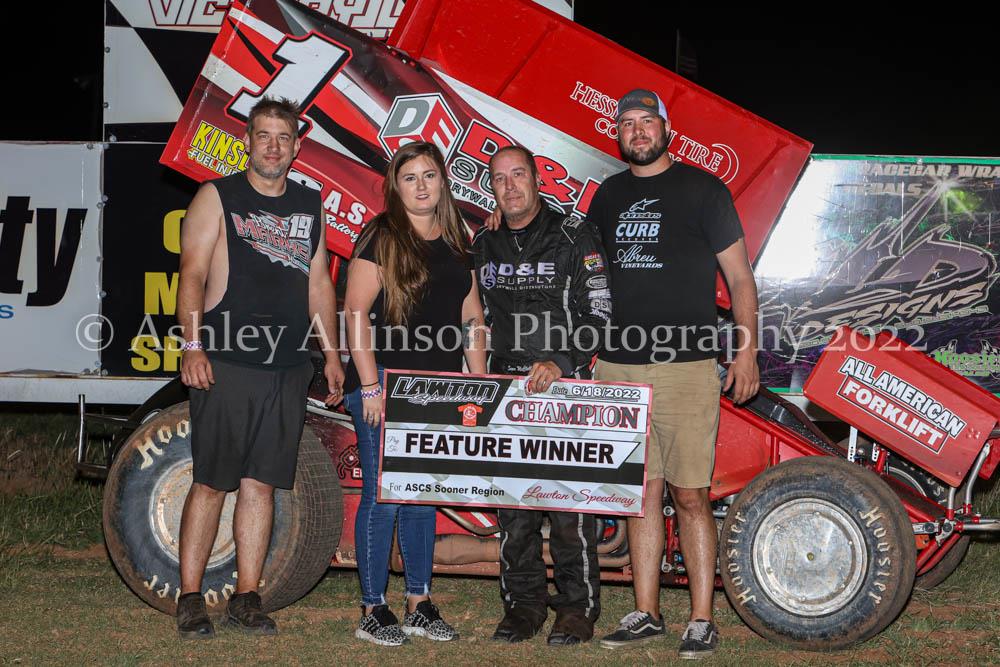 Bryan Hulbert – LAWTON, Okla. (June 18, 2022) Rolling into Victory Lane at Lawton Speedway with the American Bank of Oklahoma ASCS Sooner Region presented by Smiley’s Racing Products, Sean McClelland captured his 20th career victory with the Oklahoma-based region, and in doing so, has tied Ft. Worth’s Kevin Ramey at the top of the win chart.

Kevin has held the spot with 20 wins since August 22, 2014, at what was then called Red River Speedway in Iowa Park, Texas. At the end of that season, the ASCS Sooner and Lone Star Regions combined into the Red River Region through 2018.

Taking off third at Lawton, Sean battled with Kade Morton early as Whit Gastineau took off with the point. A pair of cautions early, the race resumed with three laps complete and the No. 2 again leading the way. Working on Morton for second, after Shebester pulled off during the previous caution, the No. 87 shot to the runner-up spot and began tracking down Gastineau.

Both working the top of the Lawton Speedway, McClelland began moving his entry around. Starting to pull up on the No. 2, the pair raced a couple car lengths apart for several laps. Able to get some room over the No. 87 through the mid-point of the A-Feature, the caution lights came on with five laps to go.

Going straight to the cushion on the restart as Gastineau shot low, McClelland hammered down to the back straightaway to take the lead and run away to the win. Getting a challenge from Morton coming to the white flag, Whit was able to fend off the charge. Jeffrey Newell made it to fourth with Kade Morton in fifth.

The next event for the American Bank of Oklahoma ASCS Sooner Region presented by Smiley’s Racing Products is slated for Saturday, July 16 at Colcord Speedway with the Lucas Oil American Sprint Car Series National Tour.